Tour of the Camel Market and Giza Pyramids, Temples and Tombs
Your Visa to Giza 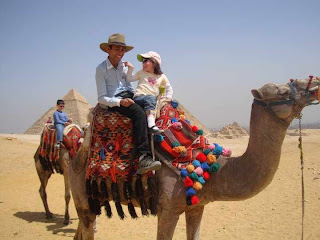 Led by the Emir of Rhyme Ahmed Seddik

The Ancient Daughter Library at the so-called Pompey's Pillar
The Fort of the Mamluk Sultan Al Ashraf Seif El Deen Qaitbey
The Cecil Hotel, designed by Alessandro Loria
The Ruinous Arab Walls of the Medieval City
The Ibrahim Mosque designed by Mario Rossi
The Catacombs of Kom el Shoqafa
The Royal Palace of Al-Montazah
The Bibliotheca Alexandrina
The Odeon at Kom el-Dikka
The Eastern Harbor
Ras el–Tin Palace
Ramleh Square
----------------------------------------
The Elephant in Ancient Egypt

In the shadow of Rameses the Great and For-Whom-The-Sun-Shines Nefertary.

The sites that we are hoping to explore:

For over 3000 years, the memory of Queen Hatshepsut remained shrouded in secrecy -- even her mummy. But in 2007, Archaeologist Zahi Hawass found a molar tooth inside a wooden box inscribed with the name of the Queen. That tooth fitted perfectly in the jaw of the mummy that Zahi assumed to be the Queen. That was the tooth that told the truth, a dental identity. Now, travel back in time IN PURSUIT OF HATSHEPSUT to reveal the mystery of the great woman who ruled Egypt in the Golden Age for over twenty years -- listen to her words!
Posted by Ahmed Seddik at 1:42 ص