Walking Tour of Giza Pyramids, Temples and Tombs
Your Visa To Giza 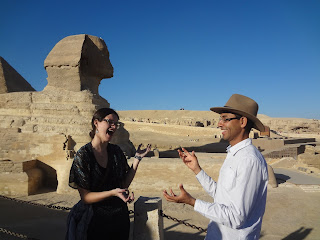 Yes, and how many times must a man look up
Before he can discern the meaning of a minaret?

Let a Minaret Narrate the Great Story of Cairo 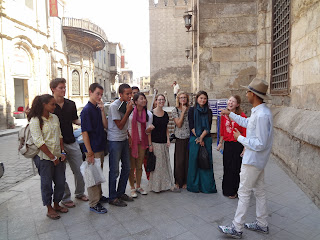 May your spirit live, may you spend millions of years, you who love Thebes sitting with your face to the north wind, your eyes beholding happiness. Words worthy of reciting in a royal garden delineated in harmonious hieroglyphs carved around the aromatic rim of the wishing cup of the boy King Tutankhamen well over 3000 years ago. To make his wish come true, the cup cuts the figure of an open lotus flower. From the dawn of Egyptian civilization, the lotus flower stood for rebirth and resurrection. President Nasser borrowed the plant for his plan upon raising the famous Cairo tower, emulating a lotus flower in the heart of Zamalek. In the wee small hours of the morning an Egyptian lily opened. Later in the day it closed. This Lillian observation of the sun led the Egyptian, who once upon a time was a keen observant of nature, to believe that lotus was a hieroglyph for rebirth and renaissance. Nasser’s emulation of a lotus flower in his tower was meant to capture this Egyptian philosophy. Nasser was the new pharaoh and he was being given credit for an Egyptian renaissance. A man, a plan and a plant. That is the order of this tour. Stories of villas, palaces, and gardens from the royalty and the republic.
------------------------------------
Walking Tour of the City of the Dead 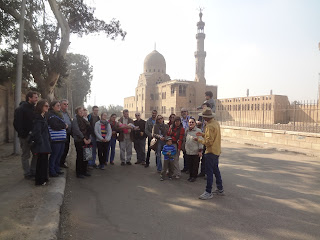 The scintillating City of the Dead, anecdotally known as Al-Qarafa, is so full of life and amenities that if you sum, you realize it is more town than slum. We will be
able to label the fabled vast necropolis and feast our eyes on monuments glorious from the City Victorious.
The lively City of the Dead is a treasure trove of masterpieces from almost all eras of Egyptian history. Walking there gives you an encyclopedic tour of Egyptian
history. True to the vision of some of its founders, the City of the Dead has the power to entertain the mind and retain the body. Around 100,000 Cairenes live here
amongst the dead. At the pinnacle of Islamic art, the monuments are architected to articulate the vision of the stellar dweller.
Picnic among the graves in the City Beyond the Walls! It is a kaleidoscope of culture.
We attempt to see:
Al-Fayed Family
Kazoroony Family
Mausoleum of Ibrahim Pahsa Halim
The Tomb of Guzal or Kuzal or Sidi Karkar
Tomb of Al-Torjoman
Mamelukes St.
Sultan Ahmed St.
Mausoleum of Sir Ahmed Mohammed Hassanein Pasha el Boulaki,
Writer, Diplomat and Desert Explorer and Author of the Lost Oases
Palace of Khedive Ismail
Tomb of Narriman Sadek, Cinderella of the Nile, the Last Queen of Egypt
War Martyrs Tombs
Tomb of the First President of Egypt, Muhammed Naguib
Amir Kabir Qurqumas Complex
The Religious and Funerary Complex of Sultan al-Ashraf Inal
Mausoleum of Princess Shwikar
Tomb of Princess Ruqayya `Abd al-Halim
Mausoleum of Muhammed Talaat Harb, Egypt's Leading Economist
Tomb of Omar Makram, Revolutionist
Tomb of Noubar, First Prime Minister of Egypt
Mosque and Mausoleum of Sultan Faraj ibn Barquq
Mausoleum of Al-Ashraf Barsbay
Tomb of René Jean Marie Joseph Guénon, French Author and Intellectual
Mausoleum of Khedive Muhammed Tewfik Pasha
Tomb of Professor Ali Moustafa Mosharafa Pasha, Egyptian Theoretical Physicist
Compound of Sultan Al-Ashraf Sayf al-Din Qa'it Bay
Tomb of Sultan Qansuh Abu Sa‘id, A.D.1499 / 904 A.H
Tomb of Emir Tashtimur
Chinese Tomb
Tomb of Ganibak al-Ashrafi, A.D.1427 / 830 A.H.
Tomb of Anas, A.D.1382 / 784 A.H.
Rab‘ of Sultan al-Ashraf Qaytbay, ca A.D.1474 / 879 A.H.
The Gate of Sultan al-Ashraf Qaytbay, A.D.1472-74 / 877-879 A.H.
Tomb of Gulshayni, CA A.D.1468 / 873 A.H.
Tomb of Khawand Tughay (Umm Anuk), before A.D. 1348 / 749 A.H.
Tomb of Amir Nasrallah (Kuz al-‘Asal) (Pot of Honey), ca A.D.1441 / 845 A.H.
Tomb of Amir Azrumuk, A.D.1504-5 / 909-10 A.H.
Tomb of Khawand Tulbay (No.80) A.D. 1363-4 / 765 A.H.
Hawd and Tomb of Qadi Muhammad Mawahib, A.D. 1685 / 1097 A.H.
----------------------------------
Cairo Markets Tour
Throughout history, markets formed a mirror reflecting the vivacity of their cities. This is never truer than in the City Victorious...
Saturday, 23rd of January 2016 at 2:00 pm
------------------------------------------
On and Off the Beaten Track:
From Sayyeda Zeinab to Ibn Tulun
Friday, 29th of January 2016 at 01:00 pm
Yalla go ahead and travel back in time on and off the beaten track.
Places are limited, so registration is required.
For reservation: Call or WhatsApp: +201006768269
Or email: ahmed.seddik@gmail.com
#Cairo #Guide #Seddik #Ibn_Tulun #Scholar #Islamic_Cairo #Ahmed_Seddik #Egypt
-----------------------------------------
On a Felucca Lecture:
Saturday, 30th of January 2016 at 2:00 pm
Ahmed.Seddik@gmail.com
Call or WhatsApp: +201006768269
The Story of the Nile:
Plants
Animals
Geology
Geography
Astronomy
Ancient Egyptian Stories:
Isis and Osiris
The Doomed Prince
Khufu and the Magicians
Arabic Stories:
Ahmed Shawqi:
Noah's Ark
The Turkey
My Grandma
The Peacock
A Nation of Rabbits
Ahmed Seddik:
The Father of Optics, Ibn Al-Haytham
English Stories:
Rudyard Kipling:
The Elephant's Child
Dr. Seuss:
Oh, The Places You Will Go
Did I Ever Tell You How Lucky You Are
------------------------------------------
Testimonials:
'Hide not your talents, they for use were made; what's a sundial in the shade?' —Benjamin Franklin
Egyptologist Ahmed Seddik on ABC News
http://abcnews.go.com/International/video/back-beginning-christiane-amanpour-moses-pharaoh-pharaoh-exodus-18086799
-----------------------------------------
Ahmed Seddik on Brazilian TV: Enigmas do Egito
https://www.youtube.com/watch?v=9DaQT3RZC3w


The International School at Dundee